The work Kyiv, forgetting Guernica, carried out by 1st Baccalaureate students from the SEK-Atlántico Social Sciences group, has won First Prize in the Analogue Art category at the Art Day Awards, organized by the Arts degree Digital of the Camilo José Cela University. In this same contest, the video Imagine for Peace, presented in the category of Art in movement, has obtained the Special Prize of the Jury.

The pictorial work was carried out in the subject of Artistic Drawing to collaborate with a multidisciplinary project of the College called Sala Ukraine for Peace. The idea for the video was born in the same project, which was projected for the families of the school as part of the acts of the aforementioned room during the past Open Day.

In the kyiv project, forgetting Guernica, the art students wanted, as has happened on many occasions throughout history, to use their work to denounce the atrocities of war. After several proposals, they decided to choose a version of the immortal work El Guernica, by Pablo Picasso.

The premises of the work were that the work would begin and end, linearly speaking, with elements chosen from the original work, and in the middle allegorical drawings would be made as a result of the multiple ideas of the students. The predominant colors were to be those of the Ukrainian flag. And, little by little, the work emerged that, finally, won the Art Day Award, in which all the schools of the SEK Educational Institution participate.

The mural was made on white cork, 210×110 cm, with tempera and acrylic, to emulate the great Picasso work. A great job done with enthusiasm, and, above all, with a shared awareness of the very serious consequences of armed conflicts such as the one currently being experienced in Ukraine. 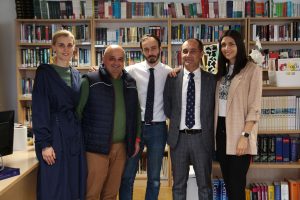 For its part, the video Imagine for Peace was coordinated by the teachers Rebeca Martínez and Iria Rodríguez, together with the music teachers Rodrigo Silva and Rubén García, plus the technology and image expert Antonio de Ron. The project materialized thanks to the participation of students from all the Baccalaureate, national and IB Diploma Program courses, who performed the theme of John Lennon during the Concentration for Peace held at the School.