SEK Education Group inaugurated the 16th SEKMUN Model United Nations in the Spanish senate, in which 200 students between the ages of 11 and 18 from SEK Schools and other guest international schools have carried out a mock General Assembly and other UN multilateral bodies, in Spanish and English, with the aim of representing the different countries that are part of the United Nations. Students honed their skills in dialogue and negotiations and reached agreements to resolve different issues and contexts of the day.

From the gallery of the upper house, the Antonio Guterres of this simulacrum, Michael Casanova, a SEK-Alborán student, began his speech by asking for a minute’s silence for the victims of the current conflict in Ukraine. In his speech, he asked the delegates “to build long dialogue tables and not walls” and reflected on the importance of SEKMUN, with the aim that “there will come a day when there will be no more wars”.

Also participating in the plenary session was Sophie Muller, representative of the United Nations High Commissioner for Refugees (UNHCR), who in her speech defended the work of this committee in protecting the victims of conflicts and stressed that “we are on the streets and the borders, day and night, I hope that the proximity of this situation will make us more supportive of those who are fleeing the war. In her speech, she applauded the SEK Education Group initiative. “You are going to represent countries with different agendas, interests and conflicts and you are going to have interesting debates on which the future of many people depends, who are caught in the middle of geopolitical strategy. Representation entails great responsibility. Only with empathy, even with opposing positions, do we find the only opportunity to prosper” and she stressed that “wherever you work, whatever you do, always try to use your power for a just purpose”.

Meanwhile, María Solanas, vice president of UNICEF-Spain, stressed the enormous impact that wars have especially on children, and drew attention to other conflicts that “are forgotten by international public opinion” and insisted that “the invasion of Ukraine poses a direct threat to the 7.5 million children who live there”. She also took the opportunity to emphasise the importance of educating in values. “We have a very powerful weapon, education, and it must be reinforced with critical thinking, respect, dignity, tolerance and solidarity. This commitment honours SEK Education Group”.

The model encourages values of empathy, freedom and solidarity. In addition, it helps in the learning of essential skills and techniques for the future of the students, such as public speaking, critical thinking, debate, empathy and negotiation. Maricruz Lagar, general director of SEK International Schools, advocated that “words are the best weapon, and those who do not think like me do not have to be my enemy”. Along these lines, Emilio Lora-Tamayo, rector of Camilo José Cela University, said that “war is not an alternative, we have to continue working with dialogue and understanding. You, the students, are our hope to solve the conflicts of the future with dialogue”.

The opening ceremony was closed by Nieves Segovia, president of SEK Education Group, who underscored the value of educating younger generations in a culture of understanding and dialogue. “After the war, rearmament will be necessary, but moral rearmament, and education will rise to the challenge”.

SEKMUN is the leading Model United Nations in our country, which has been working for 16 years to build global awareness among school children through dialogue. In this edition, between 4 and 6 March, over 200 students from International Baccalaureate (IB) programmes took part, representing the countries that are part of the United Nations. 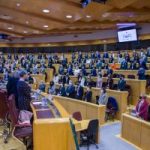 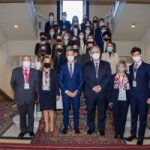 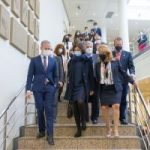